Only if life were so simple that we could hand Otis the keys to his prison cell, so when he was sober again he could let himself out of prison and get about his day.

Only if, the cops had one bullet and kept that bullet in their shirt pocket instead of the gun.

The truth is that many of us want Mayberry RFD.  Many want to go down to the local fishing hole with our son or father spending the day hooking worms and pulling the hook out of the mouths of the fish that fell for the bait.

Andy was the optimist, there was good in everyone and, everyone was innocent until proven guilty.

Barney was a small city cop that had the heart of a big city cop, with the pessimism to match.

Sunday mornings in such a town would have been about getting the family up and dressed in their Sunday best and all sitting in the pews attentively listening to what the preacher had to say. After church, pleasantries with the other “saints” would be exchanged and in some church’s most likely Fried Chicken on the grounds would be in order.

Most certainly if not enjoyed as a group, each family might retire to their own home to enjoy Fried Chicken, homemade ice-cream (you know the kind without listeria) and lemonade on the front porch, “family time.” 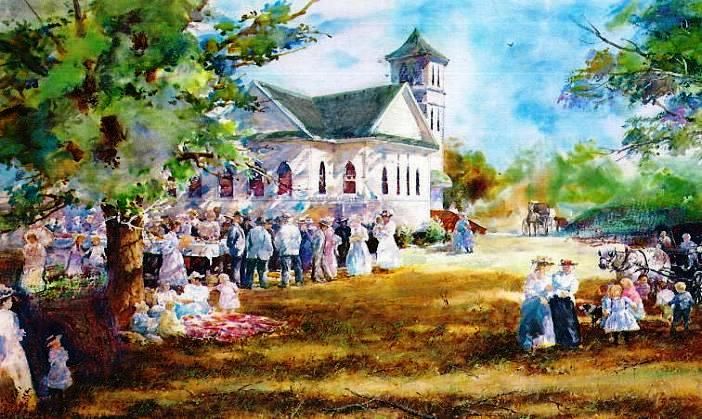 Where have we gone astray?

I think it started with radio, and then TV, and now we have so much technology that the world has become a small place. All the evils of the world have pervaded the threads of our humanity, which cause many of us to rail against it and some to simply shut down and ignore it.  We seek refuge in the few places that seem untouched by “life” and Church is such a place. 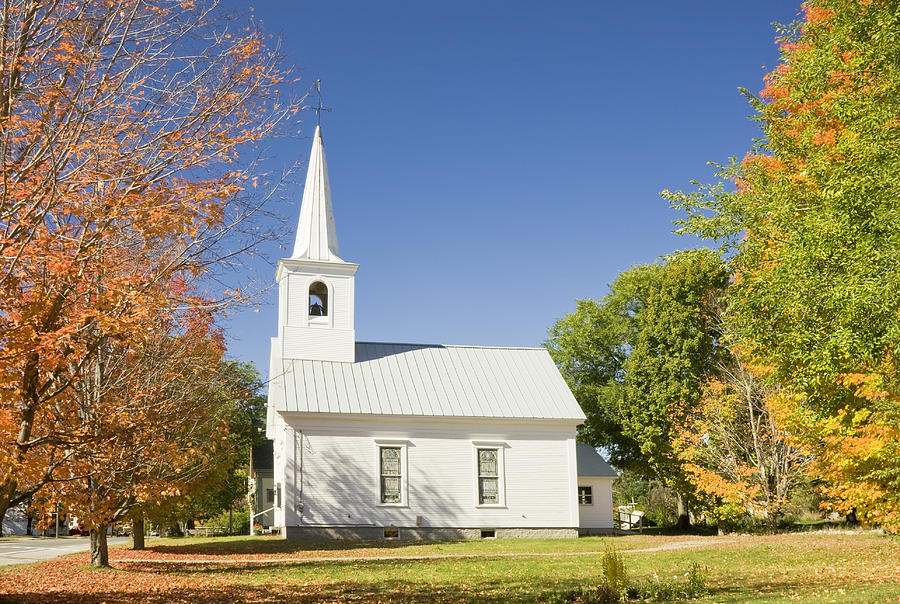 The old Hymns of the 1800’s still comfort some of us, and for a little while we focus on things other than their evil but, our own sins, and how we might do better and of course, give thanks to God.

Today, on the way to church, at the bottom of a hill sat a cop with the latest in technology LIDAR “light detection and ranging” equipment.  This device can accurately determine your speed down to the .00 “hundredth” of a mile per hour.

While Mayberry and Andy are nowhere around, at this time of the day the road is occupied by a high percentage of folks headed to church.  The cars are full of families with the mother making sure that Johnny has matching socks, and not the pair with the holes in them.

Mary is trying to apply that last bit of makeup before they arrive, as she wants Steve to notice her. Dad is trying to get to church just one day on time; without getting into a fight with the wife or children about things that have to be done before Monday.

Since the family has left the house a little late, it is important not to catch the lights and hitting the brakes while going down the hill seems counter-intuitive as the speed picks up from 40 to 45 in a few hundred feet anyway!

Enter into the picture a modern day Barney Fife.  Young guy wearing a freshly pressed uniform, clean car and sporting the most modern technology available, purchased with tax dollars from those he is “hunting.”

I simply do not understand why cops have an image problem?!

If it takes high tech toys, pointed at cars going down a hill to determine when the driver has exceeded some magic number to earn a ticket of $200 plus dollars, while on their way to church, why do it? Is it to make this guy’s day, or increase revenue? Does he have some imposed quota of tickets that he must reach or is it simply a friendly competition with his fellow officers to see who gets the most tickets written in the month?  What motivates someone to sit at the bottom of a hill, waiting for some poor slob to not hit the brakes while going down the hill?   I can tell if someone is driving stupidly without the gadgetry, can’t you?

Make no mistakes about this blog…  I want the cops to do their jobs.  “To protect and to serve!”

If someone comes through there at 50 weaving in and out of traffic, I want them stopped!  That does not take LIDAR to figure out.  If someone is driving recklessly, they need to be held accountable.  If on the other hand someone gains a few miles an hour going down a hill on a Sunday Morning, when there is little traffic, and you need LIDAR to figure out exactly how fast they were going, that is simply DAFT!

Here is my challenge to you the police… Treat others as you would want to be treated.  Very simple idea I know but I think many have forgotten this, possibly because they are sitting in a cop car on Sunday Morning hunting with high tech toys rather than sitting in a pew somewhere learning that we are all sinners and all fall short of the glory of god. While the golden rule is not part of the Bible, it really should be.  Let he who is without guilt cast the first stone, is in the bible.

To you the people who see this same kind of behavior, here is what you can do.

Firstly there is technology that will beep at you, if you are speeding.  I have this in my vehicle and I use it driving anywhere.  People in my car tell me it is annoying but let’s face it, how many times have you missed a speed limit sign because it was behind a tree or bush?

Another thing is a radar detector.  I am not telling you to get one to speed, I am telling you to get one so you can even out the technology gap a little.  Radar itself will give you advanced warning, laser will not tell you anything, other than you have been tagged. Laser however is line of sight so, while they see you and “target you, if you are observant you will hopefully see them and wave, with all of your fingers….  “lead by example.”

In combination with your beeping GPS and radar detector, and eyes; you should be able to avoid giving money to the city.

The pitiful part of this is that I believe that it is all about money and little about protecting and serving.  That is why I would push for money from tickets not go into their coffers but, into education or, infrastructure.

I would challenge the Sergeants that have underlings; have them lighten up.  I can tell if someone is driving badly without any technology, I see it daily.  Do you really want people to see your guys sitting at the bottom of hills shooting lasers up the hill? Are you that damned desperate for funds that you have to ticket little old ladies on their way to church for failing to step on the brakes while going down a hill?!

To the Barney Fife’s of the world; I don’t know what drives you whether it be adrenaline, or you hated your parents but remember, one day this will be you.  You will not always be the one behind the LIDAR.  If you get stopped, are you going to pull out your badge and hope for some “good old boy treatment,” or possible professional courtesy, much like the shark that won’t bite a lawyer? You in fact are no different from us, and that is really the point of this blog.

There is this “us and them mentality” which you promote by doing things like sitting at the bottom of a hill shooting LIDAR up the hill.  Tell you what, Drag your sorry butt to Church when you are not on duty.  Go enjoy that fried chicken with your peers.  Let people in the community see you, and interact with them in a manner that is not judging.  You are no better than the rest, and when you think that you are, you are on the slippery slope.

Protect the people like you are supposed to do, which is what you signed up for.  To protect and to serve, not to hunt and to hassle.

I would also challenge the people to do one more thing.  Get a dash cam.

Not long ago I was pulling into a restaurant in Addison Texas.  Screaming out of the parking lot was a Dallas police officer who had been working radar in the parking lot, camouflaged by the other cars and trees. Had I not been keenly aware my situation and stabbed the brakes, she would have hit me head on!  Now, how do you think that would have gone down in court?  She was totally at fault, but it would have been her word against mine and possibly, possibly and unbiased third party cop, to see the evidence and maybe a witnesses but, had there been a dash-cam no contest.  Her zeal for catching some speeder on Belt Line just about ruined both of our days.  Had we collided without a camera, I feel that it would not have gone well for me. Maybe, and I hope that I am; wrong.

After the screeching stopped, our eyes met, she lowered her head breaking eye contact, and slowly pulled out onto the road.

No one is perfect and the dash cam would have made my life easier had I not been able to get that car stopped in time.

These cameras have come down in price and are certainly affordable.  If you see, as I have seen, cops driving stupidly, send the video to their boss.  They too need to be accountable.  I have listened to the scanner while I travel and seen some do some rather stupid things, including speeding excessively for no reason other than they can, because they are mistakenly under the opinion that, they are the law!  Once on camera, they will quickly find out that they are, not the law, but the man (or women) that has been hired by you to “protect and to serve!”

All cops should be required to wear active body cameras, not necessarily to point out your guilt or theirs but, to protect them from the people who would wish them harm, or by besmirching them, or accusing them of wrong doing.

At the end of the day we are neighbors, families and communities and what we each do for a vocation should not be an issue or divide us from each other.

Let’s get the Ne’er-do-wells off of the street, and if they wear a uniform, let’s get them a new vocation, as the man in blue should garner respect, not because you are told to respect them but, because they have earned it.

Sitting at the bottom of a hill, hunting church folk is not going to do it!