Facebook, where the ideas coalesce, and intelligent folks discover just how stupid some are.

“Better to remain silent and be thought a fool than to speak and to remove all doubt.”

“Even a fool is thought wise if he keeps silent, and discerning if he holds his tongue.”

The great common denominator of the day is social media.  It levels the field as it were and if you are of a mind to “let it all hang out” here is your soapbox!

Blogs are another good place to be shown as a fool, if you are indeed one.

Today one of my friends posted on Facebook this “Occupy Democrats” post regarding Denmark and how wonderful it is. 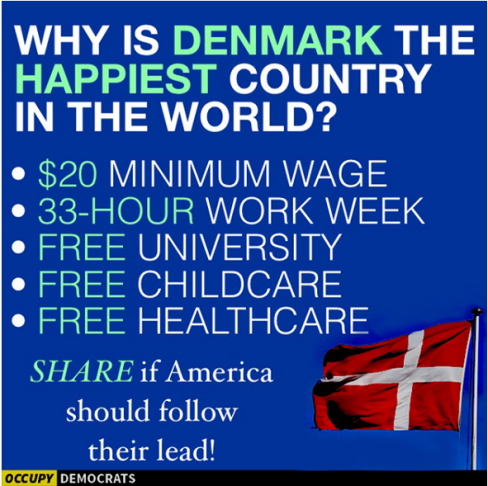 Without further investigation one would happily share this and ask, what the hell, why cant we do that?

All of this free stuff is broken out into different sections of their overall tax structure, much like the USA except ours is like 39%

So for you who did not pay attention in school when we talked about such things as math, lets do a little exercise should we?

That highly skilled Burger flipper is getting $20 and hour.  Immediately 55.4% goes to taxes so he or she is in effect making $8.92 an hour.

The VAT is pretty flat at 25% on frivolity such as that burger (prepared food vs. grocery store food,) so that burger if this is correct is $5.60 plus $1.40 VAT making that burger $7.00.  That is not the drink or fries, just the burger.

Folks, that $18.000.000.000 in debt that This President has put us in with Obama care and all of his entitlements will force the next president to institute a VAT or some other form of taxation to pay for this. If not that than most likely there will be a worldwide economic collapse as the countries monetizing their debt (printing money buying our own debt with faux money) with their house of cards, will come crashing down.

Liberal thinking must be a mental disease.  Only an insane person would walk a country down the road to its destruction, like we have done during the last 6 plus years!

The Danes have the free universities to encourage people to take advantage of it for higher paying jobs and to be globally competitive.  Obama wants the tax payers to foot the bill for higher education for certain people to be more competitive but, his agenda is social justice, not world competitiveness.

The Danes can hire and fire at will as they are not constrained by the laws that we have in this country so I look for business owners here to be under attack as well.

Denmark tries to keep their commuting time down to a minimum which is in stark contrast to the US where we have “downtown” as the place to work, forcing people to sit in long lines of traffic burning fossil fuels, and wasting hours and hours a week sitting, breathing carbon monoxide, and other noxious fumes.

The Danes on average live longer than Americans and I would have to think that their commute plays a role in the equation.

If the US had the brains of the Danes, they would think outside the box and Decentralize business’s  as to cut down on congestion on the freeways.

A couple of other differences between them and the US is the amount of people and types of government.

I noticed that I have some readers in Denmark, if I have something wrong, or you would like to contribute please do.

My facts come from hours of research and I am certain that I don’t fully appreciate the eccentricities of your government and its taxation schedules and lets face it, the facts that I have found could be in error.

Either way; it appears to those of us that know how to use a calculator that when it all boils down to the nuts and bolts, our burger flippers are making about the same as your burger flippers, ours are simply having to pay extra for the things that your high taxes are paying for currently.